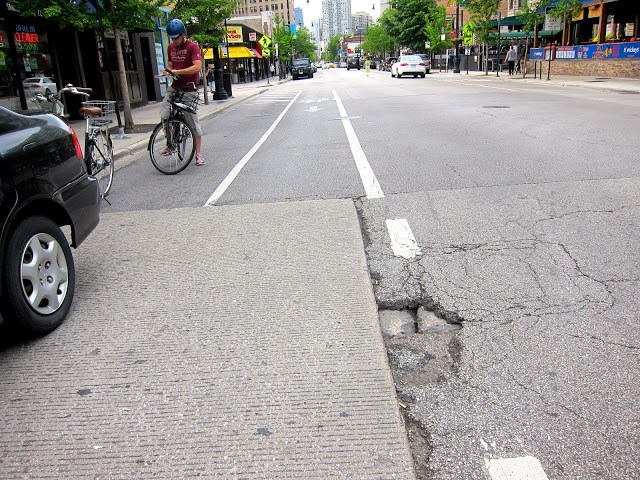 Though the 2014–15 winter hasn’t (yet) been as cold as 2014’s Chiberia or as snowy as 2011’s Snowpocalypse, the freeze-thaw cycles our region experiences each winter mean that potholes are inevitable.

The good news: Earlier this week, Chicago Department of Transportation released a list of 61 miles of arterial streets to be repaved as part of the city’s new annual standard of repaving at least 300 miles of roads!

For automobile drivers, potholes are quite a nuisance. For people biking, a pothole-ridden road can completely ruin a ride or potentially lead to dangerous crashes.

For those two reasons alone, the repavement projects are sure to warm a few freezing faces.

But beyond fixing bad pavement and patching potholes, resurfacing projects often provide the city an opportunity to install Complete Street improvements, such as high-visibility crosswalks or new bike lanes.

Neighborhood advocates should stay tuned for opportunities to help support walking and biking improvements as part of resurfacing projects happening in their community.

As a side note, be sure to check out how Jim Bachor is turning potholes into artwork in Chicago's Jefferson Park neighborhood.