Calling 311 can save lives 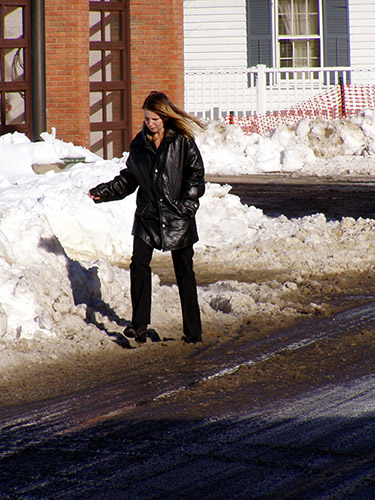 I write this blog post with an extremely heavy heart, and a plea to Chicagoland residents: please call 311 (in Chicago) or your local municipal public works department (suburbs) if you observe dangerous roadway conditions.

I failed to do so just a few days ago, and if I had, someone may be alive today.

According to the Chicago Tribune, a man was fatally struck and killed while walking on East 79th Street — about one-half mile from my home — early morning by an unmarked Chicago Police vehicle.

While many of the circumstances of the crash are not currently clear (was the man walking in the street due to unshoveled sidewalks? was the police vehicle responding to a call?), one fact has been established: an entire bank of streetlights was out.

I know because I was in that same location just one day earlier, on Monday night Feb. 2. The street was pitch black, and there were many folks walking in the street, which is, as we all know, a necessary evil following heavy snowfalls when sidewalks go unshoveled.

Again, there are likely several factors that may have contributed to this crash. Unshoveled sidewalks? Very likely. Amount of care exercised by the person behind the wheel? Maybe. But the darkness? I'm almost certain.

That stretch of 79th Street is not otherwise well-illuminated by businesses or other ambient light. Having that entire bank of streetlights out was indeed extremely treacherous.

I am pointing the finger of accountability squarely at myself on this one. The Chicago Department of Transportation and Streets and Sanitation cannot be everywhere at all times, and cannot possibly know when its facilities go on the blink.

They in many instances rely on us — residents — to alert them to dangerous conditions. Is their response time always perfect? Of course not.

The Tribune reports that, according to the 311 log, these lights have been out since at least January 29. But as most Chicago residents know, the more calls to 311 that are placed about an issue, the more that issue rises to the top of the priority list.

So the next time I see a pedestrian signal that is out, or a curb ramp that is torn up, or a crosswalk that's badly faded — or a bank of streetlights that have failed — I am going to stop, take 30 seconds to call 311, and hopefully contribute to a quicker solution to a potentially dangerous situation.

I can afford the time. And it might just save a life.