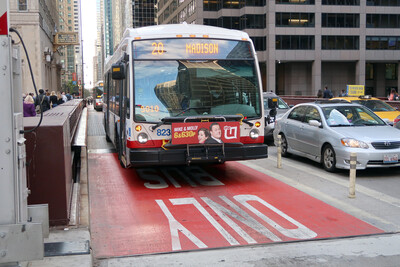 Bally’s Corporation, an international gambling company, is planning to build a $1.7 billion casino on the southeast corner of Chicago Ave. and Halsted St.

The City of Chicago is currently in the process of gathering community feedback on this massive project that promises to dramatically increase vehicular traffic on two of the city’s busiest bus routes and along major bike and pedestrian corridors.

Many people in service industries depend on transit to commute to their jobs in this area. Without improvements to bus service in this area, their trips will be delayed by the thousands of visitors to the casino every day.

We are concerned that people taking the bus, using the sidewalk, or biking to the temporary and permanent casino sites are an afterthought (a temporary casino will open in the Medinah Temple in River North).

We ask that Bally’s and the City of Chicago work with CDOT and CTA to implement “bus priority zones” on Hasted St. and Chicago Ave. to keep two of our busiest bus routes flowing smoothly through the casino site. We also want to see safer bike and pedestrian infrastructure along the two streets.

This project prioritizes leisure travelers in single occupancy vehicles over CTA riders traveling to the site or passing through the area. Let’s ensure that the priority is given to the flow of people who depend on CTA bus service. In addition, thousands of people rely on CTA’s 66 bus along Chicago Ave. to travel to destinations such as Northwestern Medical Campus.

There is great urgency for the city and CTA to speed up bus service, not slow it down with a dramatic increase in vehicular traffic. We’re pleased that CDOT and the Chicago Transit Authority have been developing their Better Streets for Buses plan aimed at improving bus service across the city. The plan will identify corridors to target and a toolbox for improving bus service.

And we’re hoping that CDOT and CTA will prioritize Chicago Ave. and Halsted St. in its plans to implement bus priority zones, transit signal priority, and other tools to improve bus service along these roads.

The Chicago Department of Transportation is improving the intersection of Chicago Ave. and Halsted St. Currently, there are no plans to implement bus priority zones anywhere in the project area, and we call on our leaders at the city, CDOT, and CTA to prioritize equitable bus service along these streets.

We must speak up for bus priority lanes on Chicago Ave. and Halsted St. at the permanent casino site as well as for safe biking and pedestrian access along both streets. With the planned intersection improvements and upcoming construction, we have an opportunity to improve mobility for everyone!

As more opportunities arise for public input, we’ll keep you posted on how you can help pressure the city to create better transit service near the planned casino.