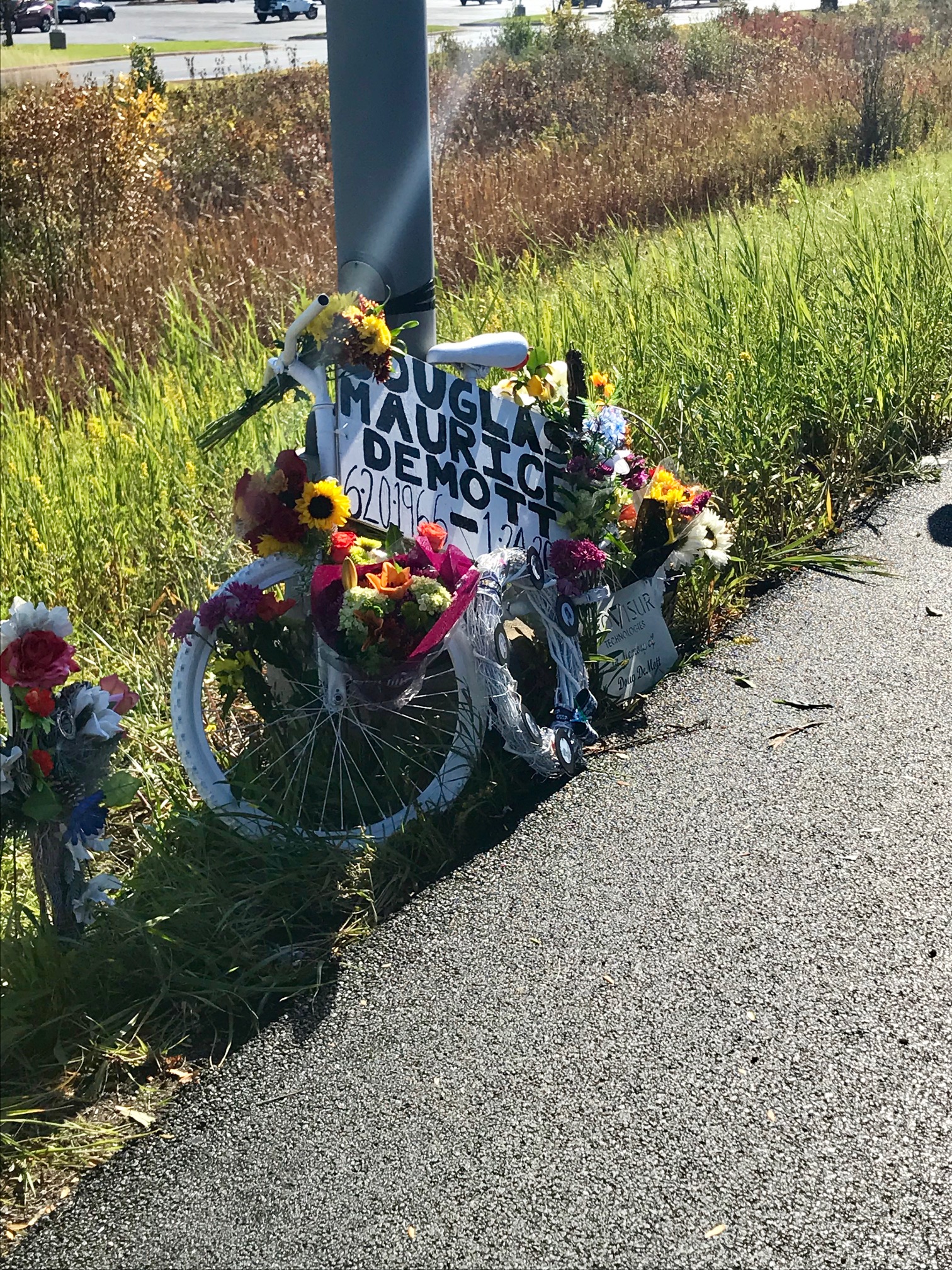 Andrew DeMott is channeling his family’s tragedy into a catalyst for change.

On Oct. 27, his family held a ghost bike ceremony as a memorial to his brother, Douglas DeMott, 52, near the crash site where his brother was struck by a car on Jan. 24. Instead of giving flowers as a memorial, DeMott’s family generously asked that donations be made to Active Trans.

Douglas Demott was bicycling home along Harlem Avenue just north of I-80 in Tinley Park at about 5:30 p.m. when a 93-year-old woman driving a sedan hit him from behind even though his taillights and headlights were flashing.

This route was part of Douglas DeMott’s daily bike commute from his home in Palos Heights to his job as a warehouse manager at Provisur, a machining manufacturer, in Mokena. He rode Pace Bus 386 on Harlem Avenue from 127th Street to 183rd Street, where the bus line ends. Then he pedaled his bike a few miles west to his job.

According to Andrew DeMott, his brother had often mentioned to him that this route was particularly dangerous because there is no walking or bicycling infrastructure in the area, citing the small, unpaved shoulders and the fast-moving traffic along the major thoroughfare.

As an avid and experienced bicyclist, Douglas DeMott had scouted other routes, but he deemed this route as the fastest and most accessible way for him to bike to work, says Andrew DeMott.

“Of all the different jobs he had and different places he lived, he’d have better and worse commutes, but he kept telling us how this was the worst bike commute he ever had,” Andrew DeMott says. “There was really no good or really safe way for him to bike to and from work. It was just precarious for him.”

“There’s really just no safe passage for bicyclists and pedestrians in that area,” Andrew DeMott adds. “It’s very dangerous, and I think standing by the side of the road [during the ghost bike ceremony], feeling the cars whiz by you and then realizing this is the commute my brother took every day rain or shine, snow or sun, whatever the weather was, I think it hit home for a lot of people [who attended the ceremony].”

Bicycling wasn’t just a mode of transportation for Douglas DeMott to get to and from work. It was an integral part of his day-to-day life. 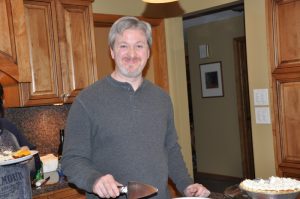 As someone who didn’t own a car and didn’t have a driver’s license, Douglas DeMott cycled regularly for errands and recreation. He liked cruising around Palos Heights and Chicago to check out book stores and record stores. He often pedaled up to Chicago to ride along the lakefront. When he was younger, he would ride between 75 and 100 miles a day.

Andrew DeMott says the crash that killed his brother could have been prevented. That’s why he is advocating for better pedestrian and bicycling infrastructure in Tinley Park.

He initially reached out to Pace to get the agency to extend the Pace Bus 386 route further south across I-80 to 191st Street, but Pace said that solution was not economically viable.

Now Andrew DeMott is collaborating with the Village of Tinley Park and nonprofits, including Active Transportation Alliance and South Suburban Mayors and Managers Association, to get the village to implement the Complete Streets policy it developed and passed in 2012.

Complete Streets is a transportation policy and design approach that creates streets that are safe for all users. It enhances street safety, encourages biking and walking, lowers transportation costs and ultimately build strong communities.

“I 100 percent think my brother’s accident could have been prevented, and it could have been prevented with some updated transportation infrastructure. The real solution now is just doing our best to make sure that bicyclists and pedestrians have safe passage and safe ways to get around.” Andrew DeMott says. “If anything can come of my brother’s crash, I hope this and through our advocacy we can motivate Tinley Park to start implementing the things that they said they were going to.”

In the meantime, the DeMott family is preparing to attend the trial of Dorothy Bastein, the elderly driver who allegedly struck Douglas DeMott, in January 2020. She was cited for failure to exercise due care to avoid colliding with a bicyclist and violating the night restriction on her license.

Legal experts say she will most likely have her license revoked if found guilty of the charges. No matter what happens, Andrew DeMott wants to make sure that this crash reminds people about the importance of keeping pedestrians and bicyclists safe.

“This has changed our family forever,” Andrew DeMott says. “We know this is going to be challenging for us, but we don’t want my brother’s death to be entirely in vain. We want to see [walking and bicycling infrastructure] improvements, and we want to make sure that this doesn’t happen to another family.”