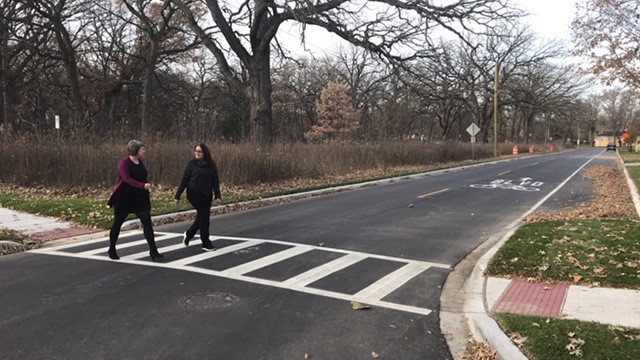 The Village of Brookfield is now home to one of the first bicycle boulevards in the Chicagoland suburbs!

What exactly is a bicycle boulevard? Sometimes termed a “neighborhood greenway,” a bike boulevard is a low-speed street that prioritizes bicycle traffic. Bicycle boulevards use signage, paint and other traffic calming features to create a safer, more comfortable environment for all road users.

At the beginning of November, the village added the finishing touches to its bicycle boulevard, which is located on Arden Avenue near Kiwanis Park and the Brookfield Zoo.

In addition to the boulevard, the village installed curb bump-outs, a high visibility crosswalk and better pedestrian access to the adjacent park to improve the overall safety of kids playing and people travelling by foot.

After passing a referendum for street improvements in early 2016, the village applied for a Healthy Hotspots grant from Cook County Department of Public Health to develop an Active Transportation Plan. With assistance from the Active Trans and input from the community, the plan mapped out infrastructure recommendations, including the bicycle boulevard, to encourage more biking, walking and public transit use.

Thanks to the hard work of proactive village staff, who were under the guidance of a plan we helped create, the bicycle boulevard is considered a welcome addition by Brookfield residents.

“It is great to work with residents that want to get involved and improve their community,” said Egan.

And the momentum continues. This fall Brookfield also learned the village was the recipient of a joint RTA and Congestion Mitigation and Air Quality (CMAQ) grant to install new long-term bike racks in the community.

Looking for a fun bike/transit field trip to see and experience the boulevard? Bring your bike on Metra (get off at the Hollywood stop of the BNSF line), and take a short ride to Kiwanis Park while enjoying the bicycle boulevard. While you’re there, head north a few blocks on residential streets and enjoy a visit to the Brookfield Zoo.