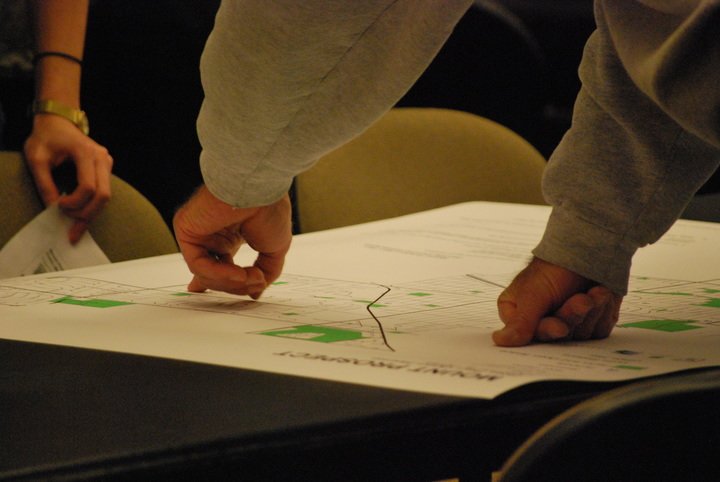 A proposed project to make a street safer for people walking and biking sparks backlash. A contentious public meeting is held. Arguments based on emotion and anecdotal experience are hurled about. People are frustrated. Rinse. Repeat.

Maybe the project moves forward, or gets watered down, or nixed entirely. Who knows? The outcome depends on a completely opaque process and constantly shifting set of criteria.

Chicago: This is why we can’t have nice things.

The dust up over proposed pedestrian and bicycle improvements to Dickens Avenue in Lincoln Park is just the most recent in a long line of public processes that leave everyone frustrated.

To advocates who understand the urgent need to cure our city of its addiction to car travel, building projects like the one proposed for Dickens Avenue is a no-brainer. The neighborhood greenway will make the street safer for everyone using it and provide an important connection for people of all ages and abilities walking or biking in our city.

To the people who are opposed to those nice things (for whatever reason), the project is a threat to the basic freedoms afforded to us as citizens of these United States of America and it SHALL NOT STAND.

But our feelings and individual takes shouldn’t be what’s driving the decision here.

The facts are clearly on the side of projects like Dickens Avenue being an overwhelmingly positive investment for the neighborhood and city. But because the decision-making process around this and other projects is so inconsistent and poorly managed, the naysayers are often able to take the whole thing captive by harnessing anger and resentment, two of the most formidable emotions when it comes to motivating people to act.

We do what we can to counter these forces. We launch petitions, mobilize supporters to show up at meetings, recruit and train leaders to speak out.

But the painful reality is that no amount of truth-telling or evidence will convince people who have already decided they are being railroaded by “The City” to cool off and reconsider their position. And the process is too often set up so these loudest of voices can just shut everything down.

I don’t know about you, but I’m pretty tired of seeing the same story play out over and over again in our city while people are injured or killed in preventable crashes, while the creeping hand of climate change is poised to take everything away from future generations, and while the neighborhoods where poor folks and people of color live continue to be denied equitable investment.

This isn’t rocket science. We know what tools work to set up a fair and transparent process for collecting feedback on proposed projects that don’t hand all power over to a narrow set of entitled people. Providing a consistent framework and more resources around community engagement will also alleviate the burden put on the shoulders of hard-working aldermanic offices and city agencies, who are more often than not doing their very best to give residents the best information and opportunity for input.

Groups like Elevate Chicago have put forth thoughtful principles for community engagement that give us a great starting point. In a hopeful sign, Mayor Lightfoot has appointed a Chief Community Engagement Officer, Juan Carlos Linares, who is tasked with strengthening the relationship between the city and communities.

Now is the time to build off of this foundation and follow through with real change.

More robust and consistent community engagement alone won’t transform our city. We must still tackle important issues like equitable funding and more comprehensive planning. But this is one place were advocates for walking, biking, and transit can chart a path forward to help restore trust in our government and distribute power equitably.