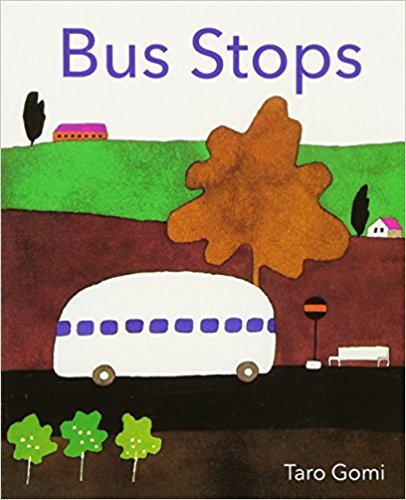 There is something exquisite about children’s books, in the lean, sometimes wry, prose and magical illustrations. I knew this, of course, before becoming a parent.

What I didn’t expect was the variety of books for young children that celebrate bicycling and public transit. As 2017 winds down and the winter holidays and gift giving begin, I wanted to share some of my family’s favorites.

My son’s first favorite book was Bus Stops, by Taro Gomi. He was only a few months old when my husband and I discovered this board book at 57th Street Books, but he would gurgle with pleasure as the bus winded through the suburbs, through downtown, and then back through the ‘burbs.

The magic of Bus Stops lies in the unexpected destinations en route. At one stop, there’s a couple that slowly climbs the steps to an old church, at another, an actor dashes off the bus to a movie set. The possibilities for going off-script and spin-off tales are endless.

Another absolute delight for the early ages is David Shannon’s Duck on a Bike.  Duck on a Bike tells the tale of a barnyard duck that spots an abandoned bike and decides to take it for a spin.

Most of the other farm animals are skeptical. The pigs think duck is showing off. The cat thinks bicycling is a waste of time. But of course, they are slowly won over. Duck on a Bike is funny, with bold illustrations, and for people who love bicycling despite the naysayers, an almost allegorical tale.

Older children in the 0-6 range will more fully appreciate the complexity of these next two books. Subway, by Christoph Niemann, follows a father and his two children as they spend a rainy day crisscrossing New York City on the city’s subway lines.

Niemann is a German illustrator and graphic designer who was recently featured in the Netflix series, Abstract: The Art of Design. With the illustrations in Subway reflecting his often abstract style, Niemann can convey entire cities with a few brush strokes.

After a ride on Subway, it’s hard not to argue with the family’s declaration: “We’ve tried cars of course, but finally found that we much prefer to go underground.”

The booksellers at Women & Children First helped us find Last Stop on Market Street. Written by Matt De La Peña and illustrated by Christian Robinson, Last Stop brings us inside the bus and introduces us to the passengers that CJ, a young boy, and his grandmother meet on their weekly ride to volunteer at a food pantry.

CJ has lots of questions for his nana, about a blind man, the gritty city and why they aren’t able to ride in a car like his friend. Her poetic answers illuminate the beauty and strength in their experiences. Last Stop collected accolades from the Caldecott, Newberry and Coretta Scott King Awards.

Based on commentary from his daughter, Major Taylor begins with Marshall Taylor’s early fame at a bicycle shop in Indianapolis, then follows him as he wins his first race and beats fellow world champion Edmond Jacqueline at a Parisian velodrome.

The book doesn’t shy away from Major Taylor’s experience of racism and discrimination as a black man and athlete. Major Taylor’s integrity and love of his bicycle is palpable in the gorgeous illustrations.

What are you favorite children’s books about bicycling, public transit, or walking?