The Chicago region is home to a transit network that connects many communities together. However, not everyone drives or has easy and direct access to a train station or bus stop, which can be miles away from someone’s home or job.

Active Transportation Alliance believes walking, biking and transit go hand-in-hand. By having trains and buses accommodate bikes, people are able to commute to their destinations easier. 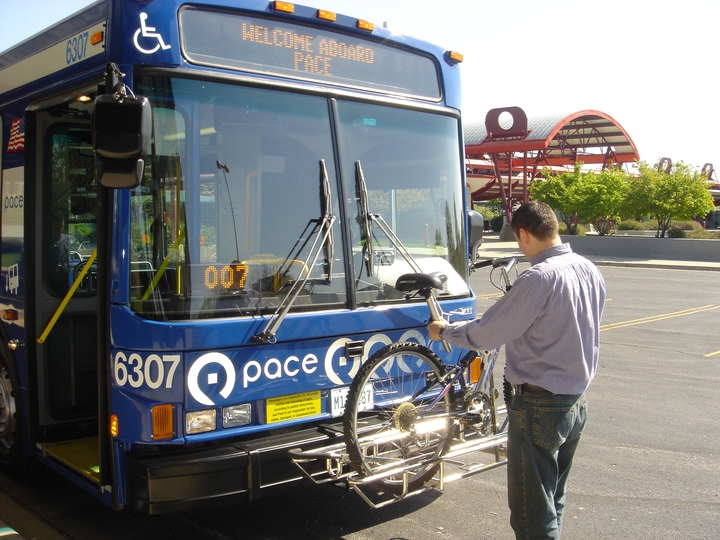 Bikes have been welcomed with open doors on trains and buses for years, but not everyone is aware of proper boarding procedures.

We’ve compiled a few important rules and tips for boarding a train or bus with your bike.

Bikes are allowed on a first come, first served basis on weekdays during off-peak hours and on weekends.

On weekdays, you can bring your bike on trains in Chicago before 6:31 a.m. and after 9:30 a.m. If you’re leaving Chicago, they’re allowed before 3 p.m. and after 7 p.m. Bikes are allowed all day on weekends.

Five bikes are allowed on each train and two on Metra Electric cars. Don’t forget to bring a bungee or something that secure your bike to the designated wheelchair accessible area where seats fold up.

It’s important noting that Metra crew can prohibit bikes from boarding or have them get off during blackout dates, a case of overcrowding or the need to accommodate a person with disabilities.

Bikes are allowed on L trains every day of the week, except during weekday rush hour from 7-9 a.m. and 4-6 p.m., specific holidays like July 4th and times of overcrowding.

At the station, your bike has the higher risk of getting stuck in the turnstile, especially if there’s a tall steel barrier gate. You should use a wheelchair accessible turnstile or find a CTA attendant to unlock the access gate for you.

It’s important to remember only two bikes are permitted on each train car and shouldn’t block entrances and aisles.

The CTA has a detailed guide on the do’s and don’ts taking your bike on the train.

Bikes on CTA and Pace Buses

Taking your bike on the bus is much easier than on a train. Not only are bikes allowed during all hours of operation, there’s a bike rack attached to the front of every CTA and Pace bus, allowing for a more secure ride with your bike.

Make sure you remove all baggage or any other items from your bike. Notify the bus driver that you’ll be loading it on the front rack and do so again before getting off the bus.

Both the CTA and Pace have very similar procedures on placing bikes on racks.

The CTA has an extensive guide on how to use two different kinds of racks—Byk Rak and Sportswork–found on its buses.

Pace’s guide for their easy-to-use racks includes a section about folding bikes on the bus.

If you’re worried about your bike being stolen during your bus ride, lock up the tire to its frame. Locking it up to the front bike rack is prohibited.

Following these guidelines not only ensures the safety of everyone, but for your bike as well.

Template:
Detail template
Parent Page:
Resources
Teaser:
The Chicago region is home to a transit network that connects many communities together. However, not everyone drives or has easy and direct access to a train station or bus stop, which can be miles away from someone’s home or job.
Tags:
Bicycling
Transit