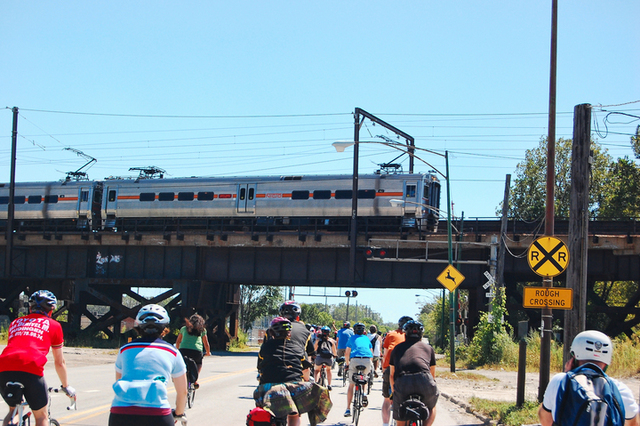 On July 31, the Northern Indiana Commuter Rail District (NICTD) will be holding a board meeting to discuss how bikes can be allowed on the South Shore Line trains in the near future — and hopefully the board will have an updated proposal.

A team of NICTD consultants recently released a proposed plan to allow bikes on the South Shore Line trains.

This sounds like a good thing, right? Unfortunately, the plan proposes that the pilot program start in six years. That’s the timeline for the pilot program — not the actual delivery date for a fully-functioning bike service.

The pilot study would be limited to specialized cars on a limited number of trains, serving only select stations with high-level boarding platforms, which is completely different than the comparatively easy and convenient service passengers with bikes have come to expect on other local transit lines like Metra and CTA.

It’s important to acknowledge that NICTD faces some unique challenges, such as the size and shape of their train cars.

But given that other commuter rail lines in the United States have been able to figure out how to accommodate bikes, we believe creative approaches and a greater sense of urgency can help NICTD find a workable solution to get bikes on trains sooner rather than later.

At a July 16 public meeting, local residents expressed similar concerns about the timeline of the proposed plan and the embarrassment of the South Shore Line being the only commuter rail line without bike access.

Residents and advocates aren’t alone in asking questions. A few NICTD board members expressed concerns and wanted to hear an alternative solution that can begin as soon as possible.

NICTD staff will present a plan at the next board meeting, which will be held on July 31 at 10 a.m. at the Dune Park South Shore Line station at 33 East U.S. Highway 12 in Chesterton, Indiana.

Bikes on trains isn’t the only issue NICTD is dealing with.

Currently, there is a 2-mile gap in the Burnham Greenway Trail, located in Chicago’s South Side and suburbs near the Indiana border.

NICTD, which owns the rail line that runs through the trail, doesn't want it to cross its tracks without constructing a costly bridge that would take a long time to build. Meanwhile, people are left to charter unsafe intersections and roads, unable to safely connect to other trails in the region.

If you support safer biking and walking infrastructure on the Burnham Greenway Trail, sign our petition urging NICTD to close the gap.