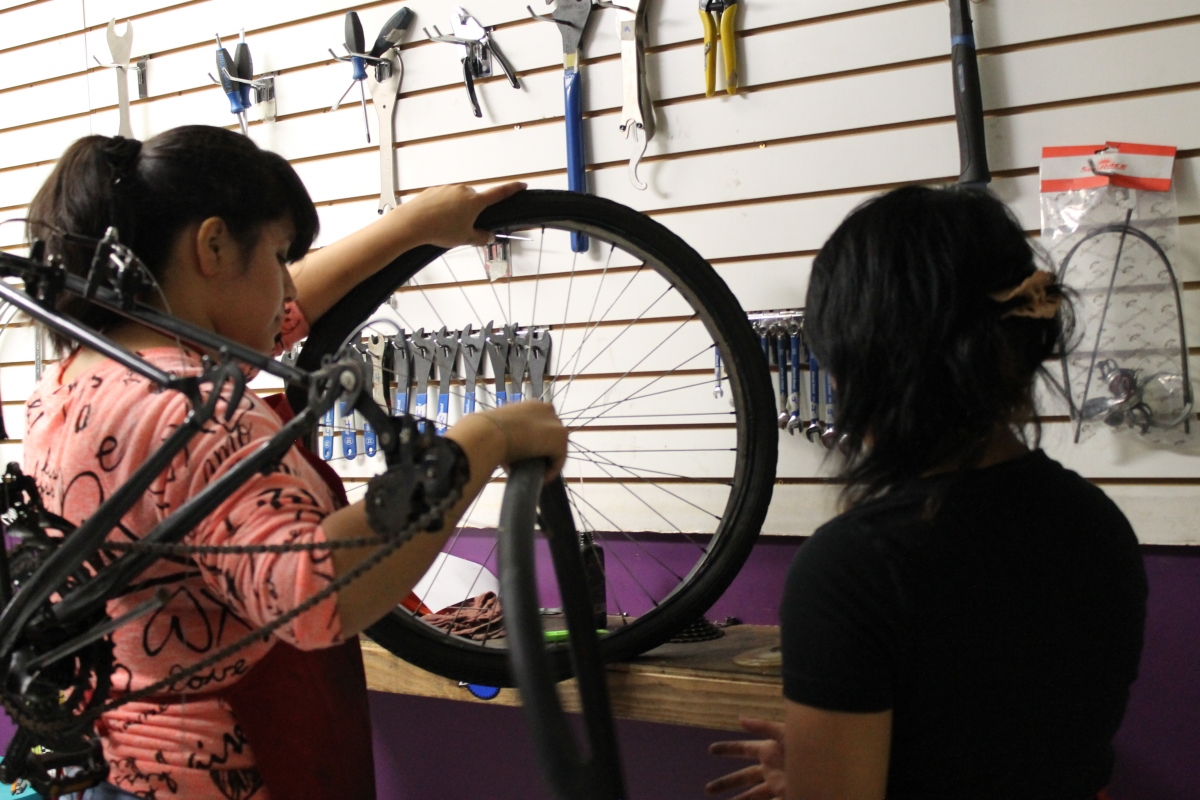 In the tiny back room of the 1,100-square foot storefront in Chicago's Albany Park neighborhood, high schoolers cluster around two bicycle repair stands. Three bikes are clamped onto the bike stands: a black road bike with its chain hanging off, a purple Huffy and a red and silver mountain bike, each with a tag detailing needed repairs.

“We’re fixing the derailleurs on this one. It’s messed up; we had to change it three times,” one young woman, Jassmyn, says about the road bike. The atmosphere in the room is one of patient concentration as the kids talk among themselves. After all, they have a job to do – an opportunity made possible by Albany Park bike shop Bikes N’ Roses.

Bikes N’ Roses has been around in some form since 2011, when members of the Albany Park Neighborhood Council decided to teach a group of kids in the community how to fix bikes. From a small collective of bike-minded residents, the program has grown into a full-fledged enterprise, complete with a business license, 501(c)(3) nonprofit status, a storefront at 4751 N. Kedzie Ave. and 20 paid employees.

Much of Bikes N’ Roses’ success can be attributed to the work of Oscar Antonio Rivera Jr., who grew up in nearby Kelvyn Park. He left a job at Cycle Smithy in Lincoln Park when he learned Bikes N’ Roses was operating without an experienced mechanic. For his work he received the Mayor’s Bicycle Advisory Council Award during the Bike to Work Rally at Daley Plaza this past June.

“What I hope to get out of Bikes N’ Roses is what I didn’t have access to when I was a youth,” says Riviera. “A home away from home that’s a safe haven, a place to be with my brothers and sisters of the cycling family who understand who I am and why cycling is crucial to my life.”

Now, in addition to fixing bikes and overseeing day-to-day operations at Bikes N’ Roses, Rivera also supervises the 18 youths who work at the shop during the summer months through a grant from the Illinois Summer Youth Employment Program (SYEP). Participants in the program earn $9 an hour and qualify if they live 200 percent below the poverty line and receive some form of state-sponsored assistance.

It’s a win-win for the shop and the children. “So many youths have a passion for cycling, and with Bikes N’ Roses as a resource, they are able to expand that passion in all sorts of creative ways,” Rivera says.

Bikes N’ Roses’ summer programming begins with a two-week crash course in bicycle mechanics before the kids graduate to fixing bikes on their own, as well as helping customers in the front of the store. About half of the teens, including Jassmyn, have completed the program and serve as supervisors who mentor the new recruits.

Although many of the kids are new to fixing bikes, they seem to have a good grasp of bike repair. They deftly pluck screwdrivers and wrenches from the walls, cut chains, change tires, remove wheels and true them.

The kids mostly work on donated bikes, and with a limited inventory they often end up “Frankensteining” the bikes: replacing parts on one bike with parts from another and figuring out whether they’re compatible.

Bikes N’ Roses is not yet financially sustainable, Rivera says, but is on the way, especially now that it has a business license and can operate as a working bike shop that brings in revenue. At the moment, Bikes N’ Roses operates on money from SYEP and the Albany Park Neighborhood Council, and Rivera and the children have become adept at fundraising; the kids raised $3,000, last year through just one fundraiser.

In October, Bikes ‘N Roses moved from its location at Kedzie and Lawrence Avenues to a new nearby location in Albany Park at 3460 W. Lawrence.

Rivera and the children do their best to give back to the local community. One Sunday, they fixed bikes for free at the nearby Global Gardens Farmers’ Market. The bikes were then donated to the workers at Global Gardens, refugees from Burma, Bhutan and Congo. “We fixed 10 bikes for them,” Rivera says. “They spoke no English, but they were in tears.”

Keep in the loop by visiting the Bikes ‘N Roses Facebook page.

This blog post was written by Sara Kupper, who served as a communications intern at Active Trans during the summer of 2014.