Better biking coming to Will County 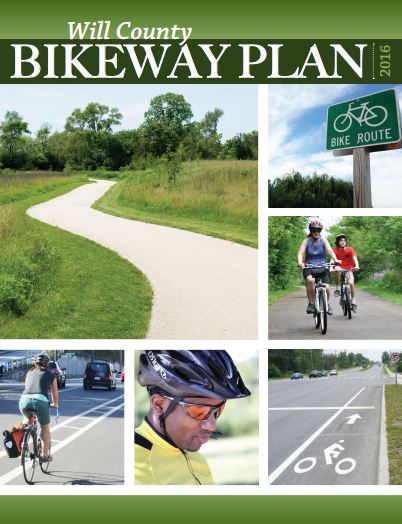 Biking and walking in Will County is soon to become more connected, safe and accessible thanks to the first-ever Will County Bikeway Plan, which was recently approved by the Forest Preserve District of Will County’s Board.

As the last county in northeastern Illinois create a bike plan, this is a huge step forward for Will County. Government officials admit that the lack of a plan may have resulted in missed opportunities around bikeways funding and expansion.

Development of the plan spanned two years and included robust research, public engagement and visioning of the future. As a member of the plan’s steering committee, Active Trans provided guidance in development of the plan, attended open houses and provided feedback on the draft plan. We are excited about the opportunity to expand bikeways infrastructure throughout the south suburban region.

The plan envisions a future network of bikeways and trails with 14 new routes that provide improved biking and walking connections to major destinations such as Metra stations, Governor’s State University, numerous parks, and many commercial centers. This new web of bikeways would add 15 new connections to surrounding counties, further increasing biking and walking connectivity of the entire Chicagoland region. The plan outlines detailed maps, recommendations and cost estimates for each of the 14 proposed new corridors.

The southeast portion of the county currently has an insufficient amount of available biking and walking facilities. The plan seeks to close this gap by offering options for increased infrastructure to connect this area to the rest of the county’s network.

Other goals include expanding “transportation choices by enabling bicycling to become a more viable transportation option in Will County” and providing “easily-accessible recreation opportunities for the public.”

Early next year, the Will County Division of Transportation will be adding the Bikeways Plan to its 2040 Long Range Transportation Plan. It is important for residents to attend the meeting and support the plan.

Additionally, the forest preserve district is encouraging Will County municipalities to pass resolutions in support of the plan. Let your local elected officials know that you support the Will County Bikeway Plan and improved bikeway accessibility in your community.

To learn more, read the full plan and visit our In Your Community South Suburbs webpage.