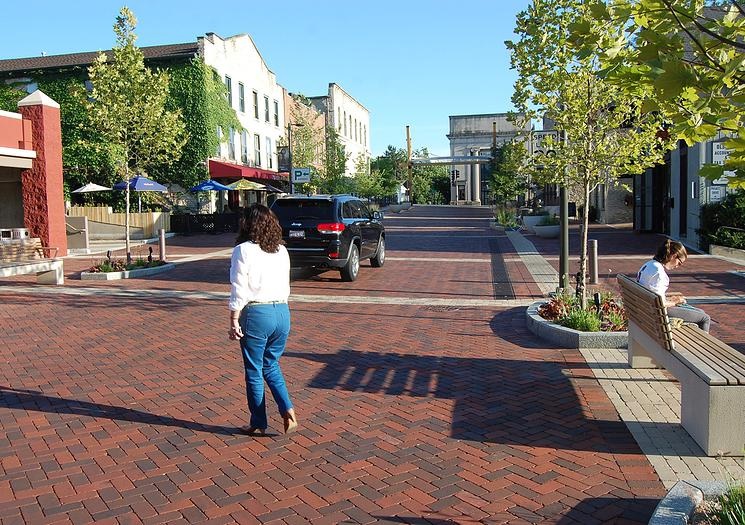 If you’ve never seen or heard of a woonerf, the city of Batavia in the western suburbs has built a great example of one. It’s a European-style shared street that looks like a brick plaza that cars are allowed to drive on. It has no curbs, no sidewalks and is designed for people driving, people biking (the Fox River Trail that runs right through it), and people walking — all accommodated by designs that effectively slow cars down.

Last year, at Active Trans’ annual awards gala, we gave Batavia an award for creating such a bold and attractive space on one of its downtown streets. The woonerf, located on a one-block stretch of River Street on the east bank of the Fox River, is the first street of its kind in the Midwest.

Since work is underway on another shared street project the region — in Chicago on Argyle Street — we decided to see how the street in Batavia is faring. How is it working with a year of use is under its belt?

When Batavia started the project, there were a number of empty storefronts on the street. Since its launch, the area has been energized and some new anchor businesses have opened their doors. One of these anchor businesses is an upscale restaurant called Gaetanos, which was looking for a unique setting that the woonerf provided.

And business owners in general have expressed appreciation for the design. The owner of a recently-opened music shop on the block likes the ample space he has to display his merchandise on the street in front of the shop.

The Batavia farmers market also moved to the woonerf. Previously in a less active area, now the market is in the heart of the downtown and has a relationship to the neighboring stores and restaurants.

An archway incorporating Batavia’s historical building materials not only separates the shared street from a busy arterial downtown street, but helps create the feeling that you’re entering an outdoor room that provides a more intimate space. Trees, planters and benches invite people to linger, and restaurants offer sidewalk dining.

Leading up to the construction of the project, a handful of Batavia city officials made dire predictions that pedestrians would be in danger from drivers. This didn’t happen, and many people on foot have expressed that the street feels safe and easy to get around on.

In addition to receiving the award from Active Trans, the project won the Best Street Award from the Illinois Chapter of the Congress of New Urbanism and was also awarded the Lieutenant Governor’s Award for Excellence in Downtown Revitalization at the Illinois Main Street Conference.

Soon after the Batavia shared street opened, the project team from the firm that designed it were out taking pictures on the street and a woman from the neighborhood stopped them to share her appreciation of the project. She said, “It’s the public space we didn’t have.”