When riding in a bike lane, ride on the left side of the lane — at least 4 feet from parked cars.

Look inside each parked car before you pass it.

If there isn't enough room to ride 4 feet from parked cars and still provide passing motorists the minimum 3 feet of required safe passing distance, it might be safer to move to the center of the lane for a brief period to prevent unsafe passing.

Watch to your left.

Be on the lookout for doors opening to your left as well. Whenever passing a line of cars stopped in traffic to your left, keep in mind that passengers might exit midblock. If you find yourself between stopped traffic on the left and parked cars to the right, slow down and proceed with caution.

We now know that 1 out of 5 of Chicago's bicycle crashes occur when someone opens a car door in the path of a person biking.

In 2011, Active Trans won a legislative victory by convincing the Illinois Department of Transportation to begin counting doorings as crashes and begin tracking them.

Then in 2013, City of Chicago, building on a 2008 ordinance that addressed dooring, increased the penalty to $1,000 for causing a dooring crash. The city also began requiring all taxis to install stickers on their passenger windows asking their fares to look for cyclists and pedestrians when exiting.

You can also print out our Everyday Biking Guide. 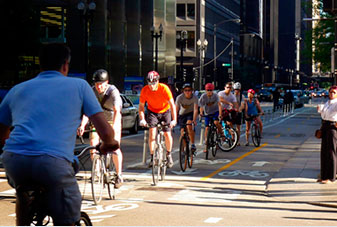 Sub header:
The Door Zone is the 4-foot area along the side of a parked car where an opening door can hit and seriously injure a cyclist.
Tags:
Bicycling
Left Nav Group:
Resources: Bike to Work