Home / Blog / Agreement is a step toward safer streets 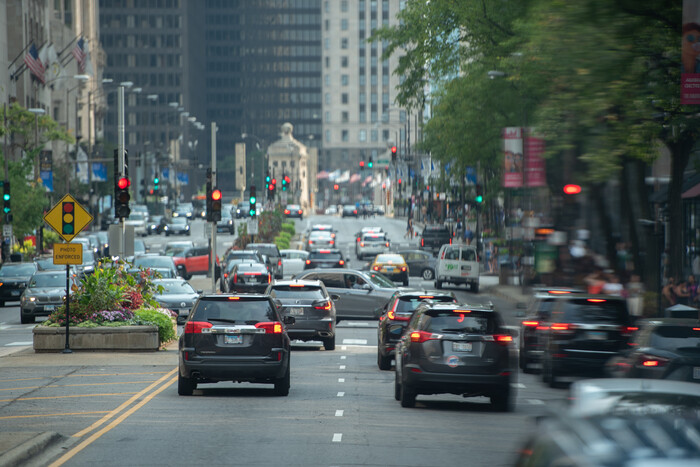 The Active Transportation Alliance is hopeful about the potential this new agreement has for making our roadways safer and more hospitable to people walking, biking, and using transit.

Countless activists, organizations, and elected officials across Chicago have been working for decades to push IDOT for safer design standards. This could be a huge win for our movement!

Why is this agreement a big deal?

IDOT owns a lot of roadways in Chicago that are maintained by CDOT. However, these roadways are typically built to IDOT standards not CDOT standards.

While CDOT is no stranger to designing quiet neighborhood streets, IDOT’s roadway design has long centered around the dangerous objective of moving semi-trucks as quickly as possible through our cities.

This approach has resulted in an abundance of dangerous, high-speed state roadways that are responsible for many crashes, fatalities, and injuries across our state – not just in Chicago.

One important clarification the agreement makes is that state roads now don’t necessarily need to be designed around large vehicles like a semi-truck. Planners and engineers can now create safer streets for vehicles that typically use a city street like CTA buses and personal vehicles.

While it may sound like a minor difference, it’s actually a big win.

According to this new agreement, lanes of traffic on certain state roads can now be designed to have a narrower lane width.

Vehicles tend to travel more slowly along a narrower roadway than along a wide one. Not only do drivers move at safer speeds in narrower lanes, but the narrower lanes allow us to reclaim space that can be used for bike lanes, bus lanes, sidewalks, and medians.

The new agreement also outlines a standard list of safety infrastructure designs (e.g., curb bump-outs and pedestrian islands) that CDOT can use on state roads that won’t need to be reviewed by IDOT.

This is important because it removes red tape that prevents CDOT from churning out safer infrastructure on state roadways. It also helps CDOT standardize how it implements complete streets projects so that it can get done faster.

Another encouraging part of the agreement is that it establishes a working group that will enhance coordination between IDOT and CDOT and help formulate future agreements between the two agencies.

STILL WORK TO DO

While we’re thrilled with this progress, we still have work to do at the state level. Based on a 2017 state law, all intersections in Illinois must accommodate the turn radius of a semi-truck, regardless of the “design vehicle” being used.

This turn radius law prevents the city from building true protective infrastructure such as bollards or raised curb-bump-outs across the city.

Part of the Safe Streets for All platform calls for repealing or amending that state law to create safer intersections across our state. No neighborhood intersection should be designed to accommodate a semi-truck at the expense of human safety.

Another concern is that the agreement is non-binding and does not legally need to be followed by CDOT or IDOT.

Ultimately, IDOT still has jurisdiction over its own roadways. So we will continue to monitor projects across the city to make sure that the state doesn’t veto infrastructure that gives priority to people over semi-trucks.

Still, this is a great foundation, and this agreement has the potential to change how we design our roadways across our region and state.