Home / Blog / An advocate’s lesson in making a difference

An advocate’s lesson in making a difference 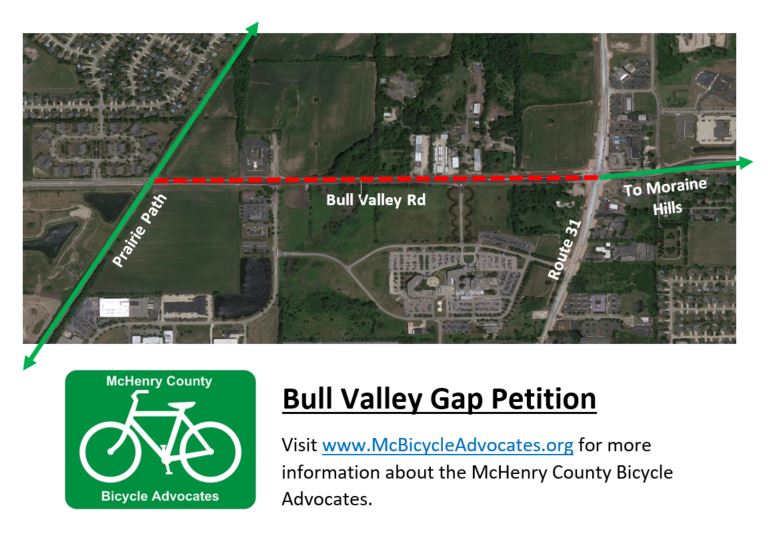 One of the highest priority transportation proposals in McHenry County has been a three-quarter mile multi-use trail along Bull Valley Road just south of the City of McHenry in the northwest suburbs.

This proposed trail extension that runs between Route 31 and the Illinois Prairie Path was also highlighted in the Active Transportation Alliance’s Trail Connect Chicagoland map, which envisions a continuous trail network in Northwest Illinois.

Closing the trail gap would establish the western link of the Millennium Trail by connecting east to Moraine Hills Park and eventually extend all the way to Lake Michigan.

As a member of the McHenry County Bicycle Advocates (MCBA), resident Greg Glover decided in 2016 he would take on securing approval for this project.

Glover describes his journey in advocating for the trail and the lessons he learned along the way:

Fast forward to early 2017 and I realized I’d done very little to move this project along. It was a mixture of procrastination (too much work!) combined with intimidation (where do I start?).

It was then that I made a commitment. I would gather signatures to show there was real community support. I remember joking that a thousand signatures sounded like a good goal.

I started out collecting signatures on my own – standing on the Prairie Path, meeting people one at a time. I then enrolled fellow members of the MCBA, local bike shops, family and friends. I found the more I asked the easier it became.

Next, I decided to ask local McHenry businesses to sign the petition. Most were eager. The McHenry Chamber of Commerce not only gave me a letter of support, they also invited me to speak at one of their chamber mixers and attend a “business scrambler.”

In the end, I obtained 1,100 individual petition signatures from people all over McHenry County and Northeast Illinois, as well as signatures from 86 local businesses, including several personalized letters of support.

In October 2017, I presented my signatures to the McHenry City Council as well as the McHenry County Board and several of its sub-committees. I’m happy to report they all approved funding for the phase 1 engineering of the trail extension.

Of course, there will still be additional approvals required in the future, including permission from the Union Pacific Railroad. It may require several years, but I’m in for the long haul now!

Here’s what I learned: Don’t let initial setbacks, fears and doubts keep you from doing something you believe in. Just get into action and don’t be afraid to ask people for help.

Thank you to Greg Glover from the McHenry County Bicycle Advocates for guest authoring this blog post.