An advocate for pedestrian safety 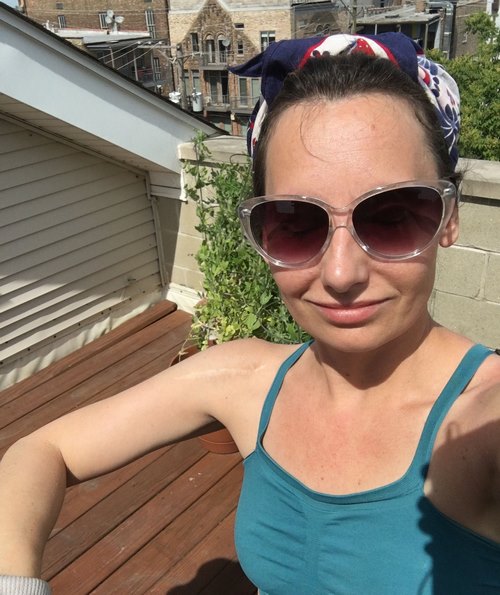 When Amy Mendelsohn walks around Chicago, she can’t help but notice the number of motorists who don’t come to a complete stop when pedestrians are walking in crosswalks — a violation of Chicago’s traffic-safety laws. The flagrant violations are so frequent that she has stopped counting how many times motorists have failed to comply with the law.

This issue is personal for Mendelsohn.

After motorists hit her in two separate collisions while she was walking through crosswalks in the city, Mendelsohn is on a mission to help improve pedestrian safety and educate the public about pedestrian safety laws.

Pedestrian safety issues began to take hold of the 41-year-old marketing and design consultant in 2008.

As she was crossing the street at a crosswalk in the River North neighborhood of Chicago, a car hit her. She ended up with a few bumps and bruises to her body and suffered from neck pain for a few weeks.

Mendelsohn regrets not taking any action at the time of the crash. “I didn’t handle it appropriately,” she explains. “I got the driver’s information. But I didn’t call the police and never went to the hospital. I somehow felt weirdly angry, but also a little embarrassed.”

“I treated it like, well, that’s just life in the city. Sometimes those things happen,” she adds.

Mendelsohn’s perspective changed when another motorist hit her in 2013. While she was walking through a crosswalk at North Western Avenue and West Augusta Boulevard in Ukrainian Village, a motorist driving a 1999 Chevy Tahoe hit her.

While she did not sustain any serious injuries to her legs, Mendelsohn did suffer from a fractured right shoulder and upper arm that required 10 metal screws during surgery.

She underwent grueling physical therapy three times a week for nine months. Her shoulder has since healed, but she will feel the lingering effects of the collision for the rest of her life.

In addition, Mendelsohn could not work during that time. The driver had the legally lowest level of car insurance coverage, covering just a fraction of Mendelsohn’s medical expenses.

As is so often the case, the punishment for the driver was hardly a slap on the wrist: a $100 fine, $200 in court fees and eight hours of community service.

“I was outraged that this person who has done permanent damage to my body and caused me severe financial distress was getting off this easy,” Mendelsohn says. “My anger about the justice system and how they handled this made me a lot more aware.”

Advocate in the making

Mendelsohn began speaking out about walking safety issues, and soon was connected with the National Safety Council, which invited her to speak about her personal experiences with pedestrian safety, including the two car collisions, at a national road safety conference.

The National Safety Council has asked her to teach classes on storytelling and how to tell an effective survivor’s story. She trains survivors who are the victims of car collisions and those who lost loved ones in car crashes on how to tell their stories so they can advocate for improved pedestrian safety measures.

In addition, she’s been speaking at meetings and other conferences about her story and the need for better pedestrian safety.

A vision for safe streets

As an advocate for pedestrian safety measures, Mendelsohn has high hopes for the Vision Zero plan recently launched in Chicago. She wants the plan to tackle reinforcement of pedestrian safety laws as well improve crosswalk infrastructure, such as longer crossing times at sidewalks and painted crosswalk lines that are easily visible.

She also believes education is key to reducing traffic fatalities and injuries at crosswalks. She urges the city and state government to remind residents that state law requires drivers to stop for pedestrians at crosswalks.

“I want to see these things being mailed or emailed to everyone — when applying for a driver’s license, any time they get a traffic ticket — put in a little slip to remind them about crosswalk laws,” Mendelsohn says.

“There are a lot of good people that want to do the right thing,” she says. “They just don’t know that you cannot swerve around a pedestrian who’s crossing a crosswalk.”

Mendelsohn believes that the Vision Zero plan could ultimately transform the way residents view the roads as something that should be shared by all people.

“There needs to be a cultural change that we’re all important and that my taxpayer money is paying for a street I can cross on two feet. And I shouldn’t have to fear for my life when I legally cross the crosswalk. That should never happen.”