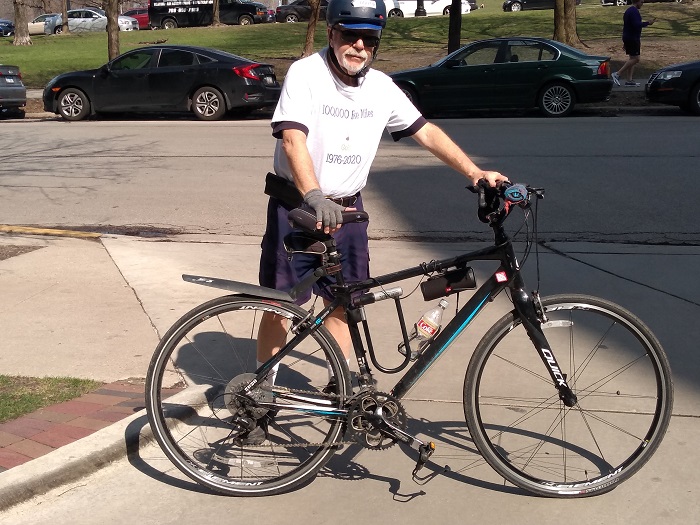 A tip of the golden bike helmet goes to Active Trans member Jon Gottlieb for crossing the 100,000-mile finish line.

Although many people treasure the Lakefront Trail as an urban retreat, as far as we know there’s only one Chicagoan who has ridden 100,000 miles over 44 years with 90 percent of that being accomplished on the trail.

Gottlieb was very close to completing his 100,000-mile goal when the Lakefront Trail was closed due to the COVID-19 pandemic. Once the trail reopened, he was able to complete the final handful of rides to take him across the finish line.

Describing himself as “just an ordinary guy doing an ordinary thing that in spite of himself evolved into something that became extraordinary,” Gottlieb adds: “It wasn’t planned. It just sort of happened.”

He moved to the Lincoln Park neighborhood only a quarter of a block away from the trail in April 1976, and started riding and counting. “I’m a stat freak like most baseball fans,” he adds.

“I am not by any stretch of the imagination what you would picture as an athlete,” Gottlieb, 70, points out. “Now that being said, I worked very hard at this and from 1988 on I developed a workout program … and became extraordinarily fit.”

He says it was simply momentum that kept him engaged and committed to applying that personal strength to the pedal.

Since 1986, when he tallied 20,477 miles, Gottlieb has been pit-crewed by Cycle Smithy. The shop maintains his bike and has presented him with trophies and T-shirts to celebrate his mileage milestones.

With this personal goal in the books, what’s next? “I want to get one warm jersey, because you know what it’s like to ride in April on the lake in Chicago.”

This post was written by Chris Zombory, a Chicago SAFE Ambassador.