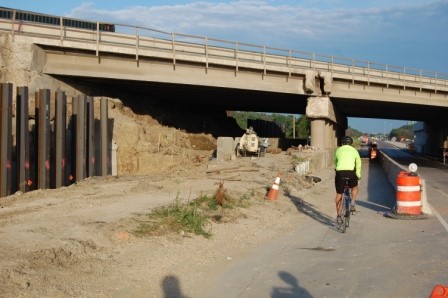 In a great example of local advocacy in action, the Northwest Active Transportation Council recently helped restore safe bicycle access to Busse Woods after a path was closed off by construction activity.

During its reconstruction of the I-90 tollway, the Illinois State Toll Highway Authority closed the bike path on Golf Road at the I-90 underpass so the space could be used for equipment.

Closing the path meant blocking access to Busse Woods, one of the most popular destinations for cyclists in the Chicago area as well as a route for daily commutes. Busse Woods is a much loved forest preserve in Northwest Cook County, containing more than 10 miles of trails that are popular for biking, walking and in-line skating.

Peter Szabo, chair of the Northwest Active Transportation Council, believed a solution could be found. With the consent of members, he sent a letter to the Toll Authority to see if a path could be created during construction.

This was no small feat – it meant creating a lane on Golf Road (see photo).

“I'm glad we were able to get something done to make it safer for bikes and pedestrians,” Zucchero said. “Constructing a major project in a developed area can be difficult when trying to keep all people moving. If there is a way to make it better, we'll certainly do what we can.”

Peter Szabo said he is “impressed and encouraged by the tollway's willingness to work with and accommodate cyclists and pedestrians amidst this construction project. The reopening of the Golf Rd. sidepath bodes well for a future of acknowledging and planning for all roadway users before and during construction, and shows people that steps are being taken to create a more inclusive roadways network.”

If you're interested in staying in the loop about advocacy efforts in the West and North Suburbs, please visit Active Trans' website pages focusing on these regions.