A Q&A with Jeff Speck 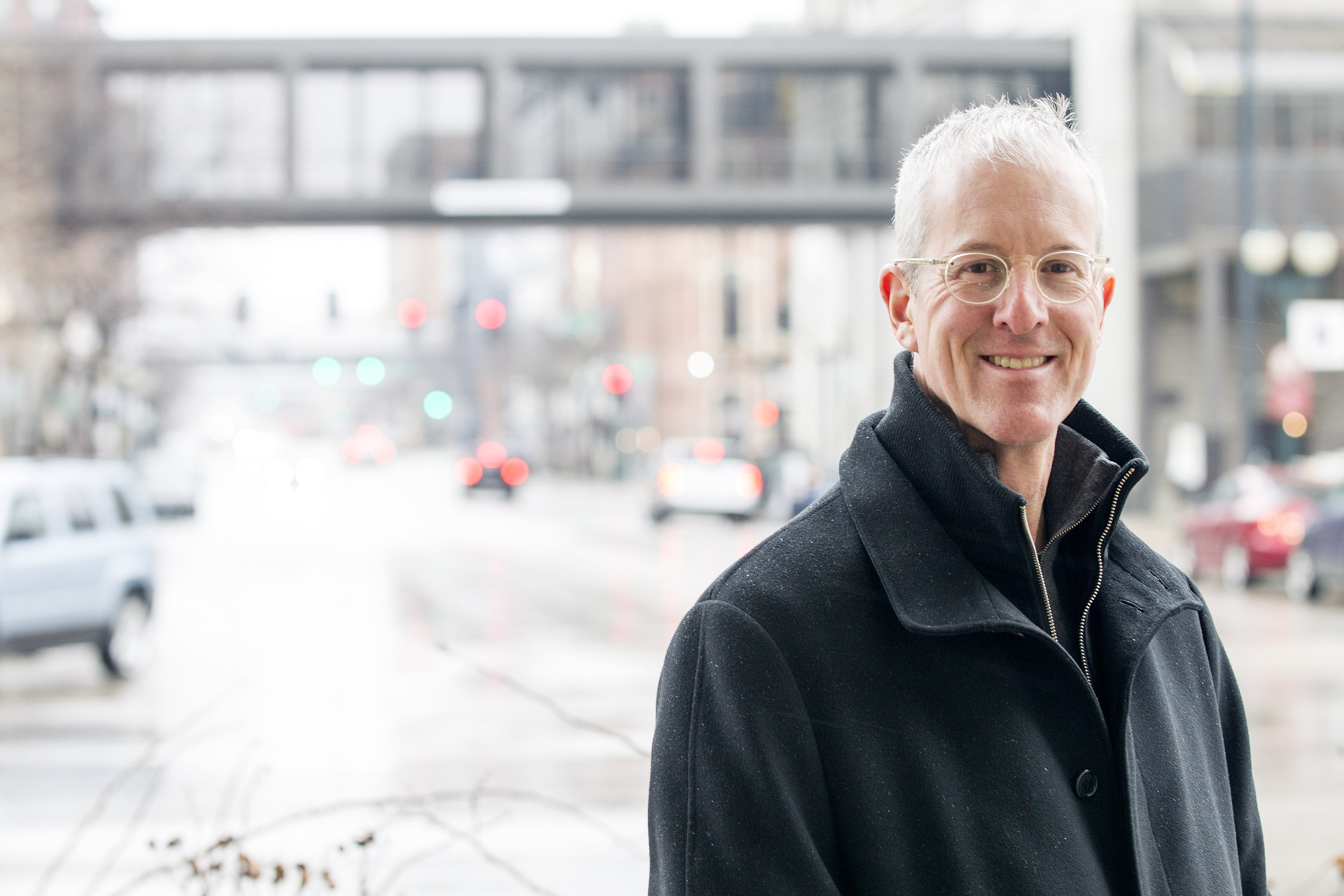 Jeff Speck is one of the leading voices in the nation for creating cities that are better places to walk, bike and use transit. He’s a city planner and author of several books, including, most recently, “Walkable City Rules: 101 Steps to Making Better Places.” This book was a followup to his very popular, “Walkable City: How Downtown Can Save America, One Step at a Time.”

We recently had an opportunity to ask Jeff his take on what’s needed to make Chicagoland a better place for biking and walking.

Active Trans: What’s the biggest barrier to walkability in a large North American city like Chicago?

Jeff Speck: I will mention an insurmountable barrier and a surmountable one. Insurmountable is the fact that, in almost every American city, even Kyoto Accord cities, it is impossible to succeed with any proposal that reduces the capacity of any road network.

In complete ignorance of the concept of Induced Demand, cities refuse to understand that, just as more lanes invite more traffic, fewer lanes invite less; congestion is the constant and, absent congestion pricing, it is the only real constraint to driving. We could have the streets we want without more congestion, but nobody believes this. And we are going to meet our climate goals how?

The surmountable barrier is the confusion between vehicle speeds and vehicle flow. We can have a very high volume traffic network in which almost nobody speeds. But engineers design streets to invite speeding, thinking that it improves flow, when often it doesn’t. The most effective work that we are now doing in many cities involves correcting this misperception.

Active Trans: What are some easier-to-accomplish strategies in the suburbs that will promote walkability?

Jeff Speck: I write about this in “Walkable City Rules,” where rule 100 is Don’t Give Up on Sprawl. If I may quote at length:

The first and best opportunity, available only in places that experienced real growth before 1950, is to find the old Main Street and bring it back to life. Sometimes, a town that appears to be all sprawl, like Tigard, OR, is stealthily concealing a spore of urbanism that is ready to germinate if given the proper care. . . . Wise communities will focus their investment there, fix the streets, build new housing, and reinforce a walkable design standard to create a core of walkability that can lift the entire community.

But then there are all the newer places like Chandler Arizona, 250,000 humans doomed to scuttle around perhaps the most utterly placeless landscape in America, 65 square miles of entirely car-dependent nowhere. Without the full-scale insertion of a large, new town center, what can be done to make the denizens of the purest sprawl less isolated?  While true walkability is out of the question, the most essential improvements would seem to surround safety for pedestrians, cyclists, and drivers too. People are dying in these landscapes at an alarming rate, thanks to high-speed road geometrics, inadequate crossings, and rare and dangerous bike lanes. Such places can’t really be fixed, but they can—and should—be made safer using many of the techniques contained in this volume.

Active Trans: As you point out, redesigning our streets so they are better for everyone doesn’t have to mean expensive street reconstruction. What are some of the more affordable, short-term design fixes that can have the biggest impact in a city like Chicago?

Jeff Speck: Most of the work I do in cities involves street restriping, with little reconstruction. First, you eliminate any traffic lanes that are not mandated by car counts. Then you narrow each lane to the NACTO standard of 10 feet. Then you take all the space gained and rededicate it to curb parking and/or bike lanes, whichever makes the most sense. Using just a new topcoat and paint, these changes can have a profound impact on a city’s walkability and bikability.

Active Trans: Improving walking and biking is often associated with displacement. How can improving these features of a neighborhood help create greater equity?

Jeff Speck: As noted in the book, cycling is not the elite activity that people believe it to be. In the US, fully 39 percent of bicycle commuters hail from the lowest 25 percent of income earners. They are your janitors and fry chefs. Investments in cycling are investments in equity.

The same applies to walking, only more so. Almost a third of Americans can’t drive, and they are disproportionally poor. People earning $10,000 per year are four times as likely to walk to work as people earning $100,000. Poor, elderly, and non-white pedestrians are disproportionately killed in traffic. And, thanks to ADA, investments in walkability especially help the differently-abled to get around.

All that said, displacement is a real problem in many improving neighborhoods. “Walkable City Rules” discusses a number of effective measures that cities have used to retain existing residents, including Community Land Trusts, Rental-to-Ownership programs, and Property Tax Freezes. What is needed to fight displacement is not proven techniques, but rather local leadership that cares about this issue.

Active Trans: What are the most common and dangerous misconceptions about autonomous vehicles?

Jeff Speck: The most common misconception is that they are going to happen anytime soon.

The most dangerous misconception is that they are a solution to our transit needs. In cities that have both adequate transit systems and significant traffic, a shift from trains and buses to AVs—even swarming AVs—represents a tremendous reduction in people-moving. It’s a simple fact of geometry: a single NY L-train moves as many people daily as 2,000 single-occupant cars.

Cities that are not investing in transit in anticipation of AVs (it’s already happening, as discussed in my book) are signing up for a future of hobbled mobility.

Use 4SPECK to get 20 percent off “Walkable City Rules: 101 Steps to Making Better Places” at Island Press.