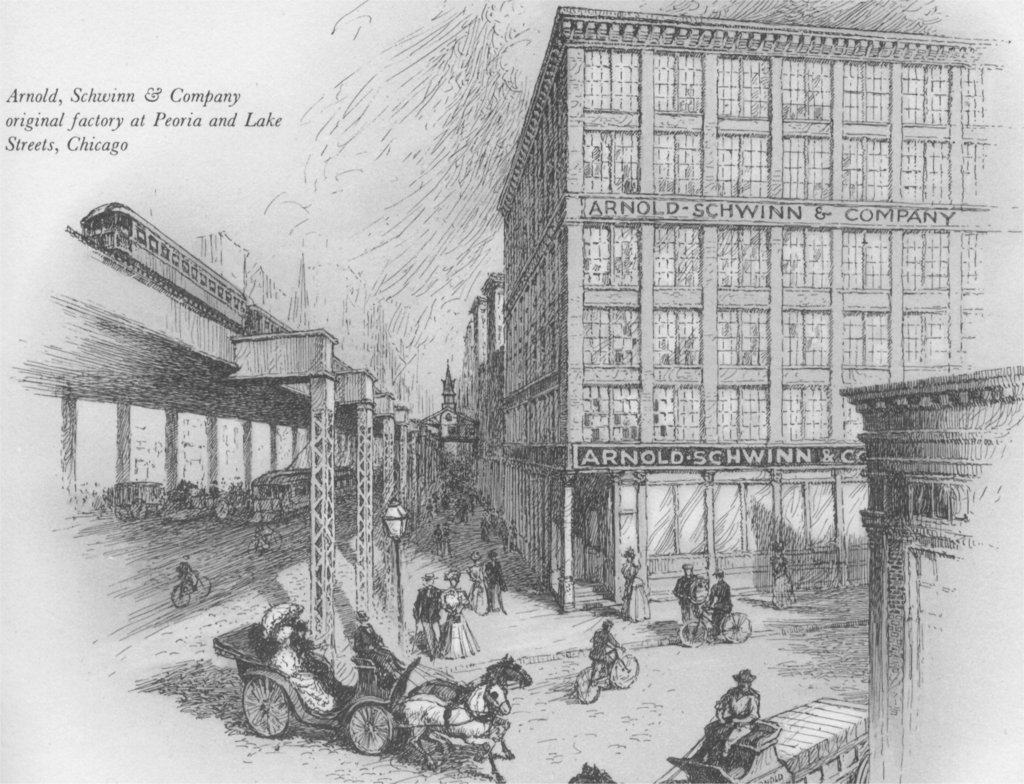 With more than 125,000 bike trips taking place every day in Chicago, it’s clear that cycling is no longer a fringe activity, but a mainstream mode of transportation.

As demonstrated with 100 miles of new bike lanes, a growing number of new trails and new parks like The 606 and Big Marsh Bike Park, and the arrival of the popular Divvy bike-share program, conditions are better than ever for people who bike in Chicago. Bicycling magazine even crowned Chicago as the best bike city in 2016.

But this isn’t the first time Chicago has experienced a bicycling boom, according to the new book Cycling in Chicago.

The book — which Active Trans wrote the foreword for — describes how bicycling was all the rage in the late 19th and early 20th centuries. It was a major player in the city’s economy, a political force to be reckoned with and a riveting spectator sport that drew thousands of fans.

We caught up with Chris McAuliffe, the book’s author, to learn more about Chicago’s rich and diverse bicycling history.

Chris McAuliffe: Chicago really was the Detroit of bicycle manufacturing. There was a big entrepreneurial spirit in Chicago. We were coming off of the Chicago fire, and the city was literally being built from the ground up. It drew a lot of entrepreneurial people here who wanted to start new companies and had new ideas. You had companies like Schwinn — that’s the most famous — but there were dozens and dozens of start-up bicycle companies that were really getting into the business.

And Chicago is in the center of the country. In the 1890s, we didn’t have an interstate network of highways like we do today. So rail was the way to go and boat. Sears had the gigantic distribution center in Homan Square, and you were able to ship bikes all over the country within a matter of days, which was revolutionary back then.

Besides bicycling manufacturing, what were some of the social, economic or political issues that really paved the way for the bicycling boom in those early days?

Bicycling was remarkably well-organized with these clubs that they had 100 years ago. You would actually purchase a bike, which was a major investment back then, and also belong to a bike club. They would have rides on the weekends and social gatherings and meetings and holiday parties. They would actually lobby candidates, particularly individuals who were running for mayor of Chicago, for whole blocks of votes. It was almost like a political action committee. [The candidates] would speak to the different groups and try to get their endorsements. And [bicycling clubs] would turn to a lot of them for infrastructure in the city to improve biking and safety. Cycling was a major political force back then in Chicago.

Were there any other factors that prompted the growth of cycling then? Did Chicago’s geography, topography and infrastructure just naturally lend itself to cycling?

Chicago was farther ahead in infrastructure than a lot of other cities. We had more paved roads than just about any other city, except maybe New York, Boston, some of the eastern cities. Whereas a lot of western towns and a lot of cities outside of Chicago still had dirt roads. They would quickly turn to mud with rain and snow.

You had mentioned that purchasing a bicycle was an investment back then. When did it become accessible to the masses?

When bikes first started to appear in 1870s, 1880s, even the early 1890s, they were very, very expensive. Then the market had more manufacturers, particularly in Chicago, glutting the market. That, of course, caused a drop in prices. So that opened it up to the working class.

Can you describe or quantify just how popular biking was in late 19th and early 20th centuries?

A really good benchmark was the six-day races. It was usually about a 12-hour day, and these bike riders would ride with partners. One guy would sleep, while one guy would ride. They would host those at the Chicago Coliseum or the International Amphitheatre or the Chicago Stadium. They would many times sell out the Chicago Stadium. At that time, it probably held about 25,000 people. [Bike racers] were equivalent to basketball or hockey players nowadays. They were some of the highest paid athletes in the country.

What was it about bike racing that drew thousands of people to those events, similar to the popularity of baseball and basketball today?

It was an exciting atmosphere and an exciting sport to watch. There were short races, too, at these velodromes that might only be 10- or 15-minute races. They’re at high speed, 30 to 40 miles per hour, racing around a wood track. Constant lead changes. Different tactics going on. Unlike a road race, which could stretch out over 30 miles and you only see the riders go through once, here they were going around the track every minute or so.

Rails-to-trails projects are a common part of bicycling infrastructure in metropolitan Chicago today. But it wasn’t always that way. Your book mentions May Thielgaard Watts, who was the first champion of the Illinois Prairie Path. Would you say she’s the pioneer of the rails-to-trails-concept we have today?

Yes. Very much so. The Illinois Prairie Path was the first successful rails-to-trails project in North America. She was really a visionary. She worked for Morton Arboretum. When she retired, she made that her life’s work — getting the Illinois Prairie Path going. It was a former right of way and the railroad that was using it went out of business in the late ’50s. She came up with the idea to turn it into a rails-to-trails bike path. She lobbied hard to get that going and was remarkably successful in not only garnering public opinion, but getting funding for it because they hadn’t done funding for bike paths back then. So [she rallied] a dedicated group of volunteers that would groom these trails. Literally volunteers running bulldozers and putting up fences and garbage containers and grading the side of the original stem, the main stem of the Illinois Prairie Path back then.

Chicago’s bicycling history is not just relegated to photos and other archival documents. It can really be seen in the city today. Where are some of these hidden gems that you would recommend that we should look out for as we’re biking and walking around the city?

Lake Street was called Bicycle Row. More than 30 bike manufacturers were located along Lake Street in Chicago from about the 900 block probably to 2000 west on Lake Street.

One place outside the city is Palos Forest Preserve. That was the site of the first cyclocross national championship. That’s a big draw for a lot of folks.

Politics and advocacy have been instrumental in advancing bicycling in Chicago. After all the research you have done for this book, from your perspective, how critical a role do these political leaders, civic leaders and community groups play in encouraging people to bike again in Chicago?

They play a vital role. You can directly trace a lot of [bicycling] projects that have gone on in the city to Active Transportation Alliance’s advocacy and its promotion of cycling in Chicago. A lot of these projects wouldn’t exist without its leadership and pushing the political leadership in the city to make funds available for these projects, and also just creating an atmosphere where their ideas are heard and their ideas are welcome.

Randy Neufeld (former executive director of Active Trans) was a big player for a lot of the changes that took place over the last couple of decades in Chicago and the surrounding suburbs. He was really at the forefront of that in terms of promoting cycling and promoting infrastructure and the development government funding. A lot of folks may not have ever heard of him, but he’s a guy who has quietly, methodically behind the scenes gotten a lot of these projects off the ground.

It also helps when you’ve got mayors and aldermen that are pro-cyclists. Two previous Daleys and Rahm Emanuel, they were very pro-cycling. They understood that as far as quality of life in the city, cycling plays a big role.

Cycling in Chicago can be purchased online and in book stores. If you would like to meet McAuliffe and receive signed copies of the book, stop by one of these these upcoming book signing events: