A look at Pace’s express service 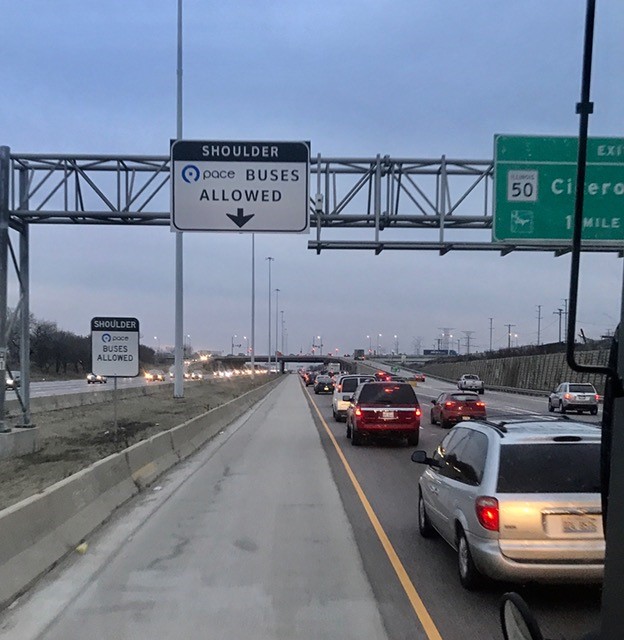 By the end of 2017, Pace is expecting to launch a new program that will allow its buses to use the shoulder of I-90 between the Northwest Suburbs of Rosemont and Elgin.

By 2040, this stretch of I-90 is expected to have as many jobs as Chicago’s Loop, so it is critical to expand access to public transit and jobs in the region.

This project is being done in conjuncture with the Illinois Tollway Authority rebuilding and widening the Jane Addams Memorial Tollway (I-90). As part of this new service, drivers will have new opportunities to use efficient and affordable transit, including free access to Pace’s Park-n-Rides, which will offer over 500 new parking spaces by the end of the year.

In anticipation of Pace's new service, we decided to take a look at a Pace similar service that has been in use along I-55 since 2011.

The service, which started as a pilot with two routes, proved so popular that it now includes five different routes servicing the Southwest Suburbs.

Additionally, since the program’s inception, ridership in the corridor has increased six-fold (to roughly 1,200 riders daily) and on-time performance increased from 68 percent to 95 percent of the time.

The routes uses new Pace buses, which are equipped with a vast array of amenities, including a stable and comfortable suspension system; reclining leather seats with seatbelts, overhead storage bins, reading lights, and venting systems; and free on-board Wi-Fi. The service costs $4 per trip and can be paid with cash or a Ventra card.

In Chicago, the route begins at Union Station before making its way to University of Illinois at Chicago, where it makes two stops.

Then it continues to the Illinois Medical District, making three stops there, before proceeding through the Pilsen neighborhood while stopping at the CTA Pink Line Damen stop. During my trip, we picked up a total of 28 passengers before the bus ran express along the shoulder of I-55 to Bolingbrook and Plainfield.

Since it was rush hour, I have to admit it was very satisfying passing stopped traffic for miles as we hummed along at about 40 mph – easily the biggest benefit of this express service.

The only kink was about a mile gap between I-294 (The Tri-State Tollway) and County Line Road, where the shoulder is not wide enough to support bus travel, forcing us to merge with regular traffic.

I arrived  20 minutes early (!) at my destination – the Bolingbrook Old Chicago Park-n-Ride.

The station’s location has a lot to be desired since it's in the middle of an industrial park off of IL Route 53 with little to no pedestrian access to the surrounding area.

The bus then proceeds to Plainfield, where its park-n-ride facility is much more pedestrian-friendly location in the town’s downtown area behind the village hall.

Regardless of the drop-off environs, this service provides a much-needed public transit link between the suburbs and major job centers in Chicago.

The biggest drawback to the route is its scheduling: only running into the city during the morning rush period and back to the suburbs during the evening rush. But if ridership continues to expand, the impetuous for continual scheduling could be a possibility.

Overall, the service is reasonably priced, comfortable, timely and it fills in a large gap in public transit access in the region.

Given the concentration of jobs along the I-90 corridor, the new service could be a hit. And we commend Pace's plan to offer this service on all of Chicagoland’s expressways in the future.