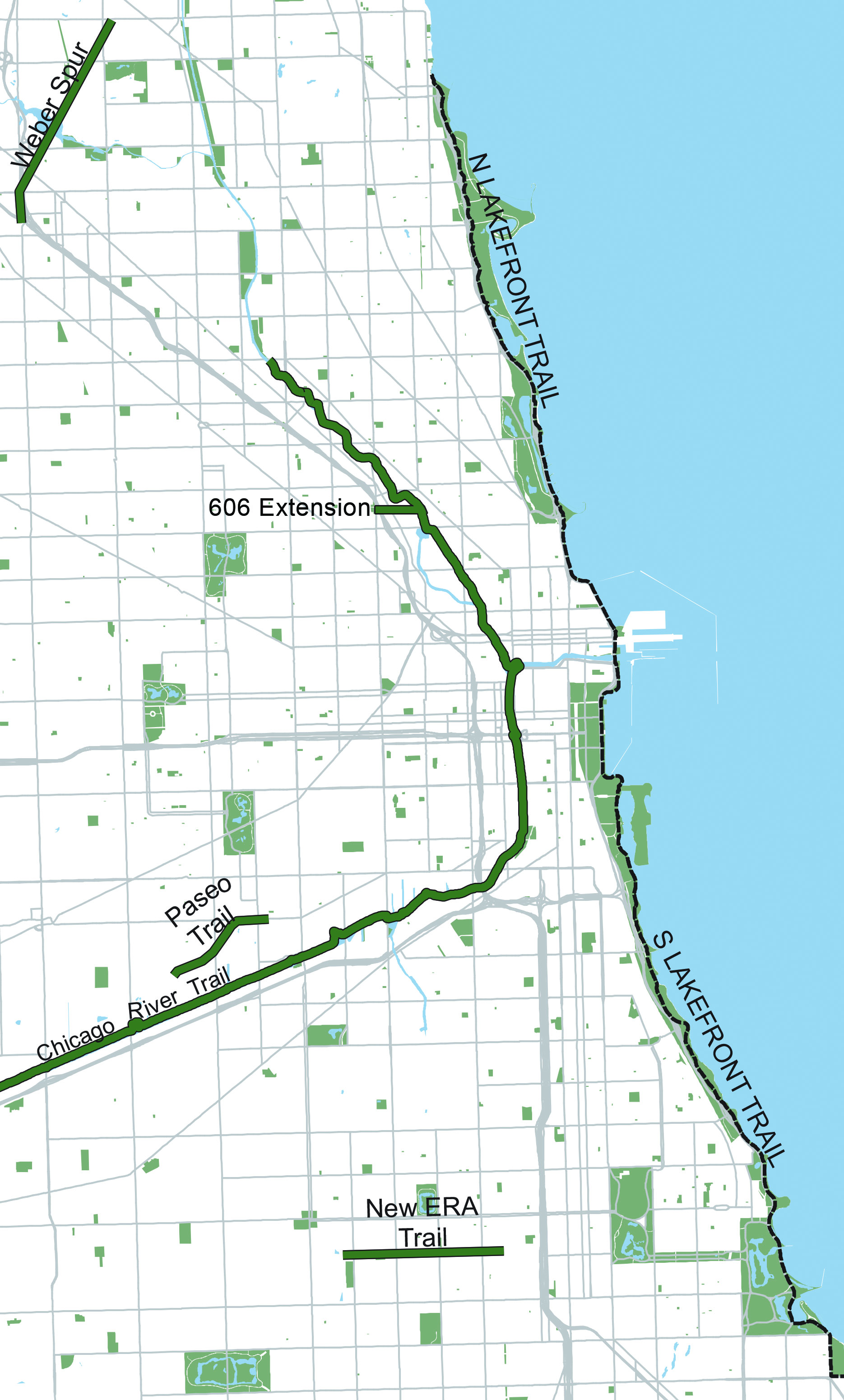 The 606 and the Bloomingdale Trail, Chicago’s new rail-to-trail and park project, made national headlines when it opened up this summer, and in just a few short weeks established itself as one of Chicago’s most popular public spaces.

The overwhelming success of the trail leads to an immediate and obvious question: where can we put more trails?

The eastern end of the 606 is separated from the Elston and Clybourn bike lanes by a formidable obstacle: the Kennedy Expressway. This makes coming from or going to the east difficult. Currently, the closest routes under the highway are busy North Ave. or Cortland, which involves navigating the high-crash intersection at Cortland, Ashland and the highway ramps.

The success of the 606 makes the case for extending it east over or under the highway to Elston and, one day, a Chicago River Trail (see below) so Chicagoans can more easily access the 606 and connect to bike lanes and sidewalks.

The North Branch Trail, the North Channel Trail, and the Riverwalk are already among the most popular trails in the region. There is an opportunity to build off of these existing facilities to create something truly special: the Chicago River Trail.

Perhaps the project that would be most similar to the newly unveiled 606, the New ERA Trail (Englewood Remaking America) in Englewood would also run along a former elevated railroad right of way.

The proposed east-west route sits between 58th Street and 59th Street and would run from Hoyne to Wallace, a distance of 1.7 miles.

Last fall, the city OK’d acquiring the necessary land, but a complete timeline for full development has yet to be announced.

This proposed trail would connect Little Village and South Lawndale from 26th Street and Washtenaw Avenue almost a mile and a half to Central Park Avenue and 32nd Street.

The trail would run along an out-of-service BNSF railroad line. Currently, the city is carrying out initial studies to determine how to proceed developing the project and identifying resources.

While the 18-mile-long Lakefront Trail is already one of jewels in Chicago’s trail network, heavy congestion, especially near downtown, has led to more conflicts and stress for people biking, walking and running.

The solution: build a parallel trail just for bikes to act as a superhighway for commuters and recreational riders. This separation already exists in certain areas, especially on the South Side, but other opportunities exist to create safe spaces for everyone along the entire length of the trail.

Active Trans is pushing for near-term solutions as well as long-term fixes, such as incorporating a separate trail into the planned reconstruction of North Lake Shore Drive.

On the Northwest Side, the Weber Spur Trail would connect residents to several other trails and destinations in the Cook County Forest Preserve system.

The proposed route runs along 2.7 miles of old Union Pacific railroad. The city is moving forward with acquiring the land necessary to develop the project and is engaging local residents for feedback on the eventual design.

As these projects move forward, Active Trans will be working with local advocates to ensure that the wheels are turning and that biking, walking and transit interests are properly represented.