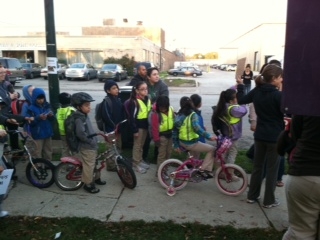 Great news arrived yesterday for thousands of school children and families in Illinois. On November 17, 2014, the Illinois Department of Transportation announced the 2014 funding awards for the Illinois Safe Routes to School (SRTS) program.

A total of 58 infrastructure and non-infrastructure projects were approved for funding totaling $5.9 million dollars. The projects will enable and encourage more students to safely walk and bike to school. Funding was divided roughly equally between the Chicago metro region and the rest of the state's communities.

A sample of funded projects include:

A full list of funded projects is here and also posted on IDOT's SRTS web page. Congratulations to all the awarded communities!