Home / Blog / Don't be a bike ninja for Halloween

Don't be a bike ninja for Halloween

Lately I've noticed a lot of people on bikes flying down the street in stealth mode, cloaked in darkness. They're known as bike ninjas. Are their attempts to stay invisible part of a Halloween costume? 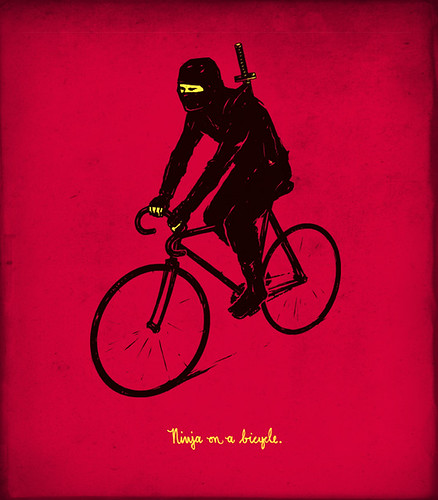 No, actually they're just riding at night without bike lights for some reason, which is both dangerous and illegal.

Being invisible on the street is never a good idea. To stay safe, you need other people, especially drivers, to be able to spot you as easily as possible. Bike crashes are more likely to occur with reduced visibility.

With autumn in full swing, the sun is setting earlier every day. And it'll get dark even earlier after Nov. 6, when Daylight Saving Time ends.

Don't get caught unprepared! If you don't regularly ride at night, check your bike lights now to make sure your batteries are charged and the lights are functioning.

And get in the habit of taking your lights with you whenever you bike, if you don't already, so you'll never get stuck without lights at night.

Besides being incredibly important to keep yourself safe, it's also the law.

The State of Illinois requires cyclists riding at night to at least use a white headlight and rear red reflector. Failure to use a light may also hinder legal action following a crash, even if the driver is otherwise at fault.

Be seen, be safe — leave invisible biking to the bike ninjas!